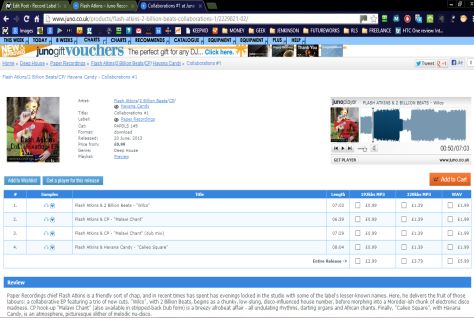 “Paper Recordings chief Flash Atkins is a friendly sort of chap, and in recent times has spent has evenings locked in the studio with some of the label’s lesser-known names. Here, he delivers the fruit of those labours: a collaborative EP featuring a trio of new cuts. “Wilco”, with 2 Billion Beats, begins as a chunky, low-slung, disco-influenced house number, before morphing into a Moroder-ish chunk of electronic disco madness. CP hook-up “Malawi Chant” (also available in stripped-back Dub form) is a breezy afrobeat affair – all undulating rhythms, darting organs and African chants. Finally, “Calieo Square”, with Havana Candy, is an atmosphere, picturesque slither of melodic nu-disco.”