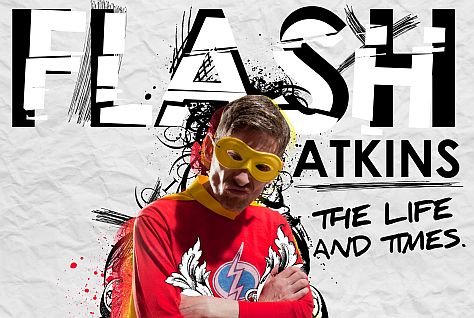 Label boss Ben Davis has pulled on tights and cape once again to launch his debut LP for Paper “The Life and Times of Flash Atkins” and it’s a belter. The first singe “Levenshulme Orphanage For Boys” had love from types such as Francois Kervorkian, Peter Kruder and Ivan Smagghe as well as glowing reviews in Mixmag and DJ Mag and the long-player has more of the same.

The tracks cover an array of musical styles from house to disco, chug funk to bass, bangers and afro rhythms to 80s influenced cosmic beats. As well as dynamic production and a keen sense of groove, the whole album is based on a short story of the life of Flash that will be published as a comic at the same time. The track and chapter titles are one and the same to provide a sensory listening experience that tells a tale reflecting the mood of the story as well as blowing up dance floors with its sonic superpowers.

There will also be a smartphone game, limited edition Flash Atkins beer called “Hops For Heroes”, full colour printed comic and remix album later in the year featuring The Emperor Machine, Steve Cobby, The Revenge, Ralph Myerz, Rune Lindbaek, Sleazy McQueen and B.G. Baarregaard amongst others.
Hugely ambitious and creative in so many ways, this album is already looking like one of the highlights of the year.

Ivan Smagghe – “Plenty in there for me for sure”

The Revenge – “Lots of great stuff on here, really digging The Wilderness”

The Emperor Machine – “Love it!”

Bonar Bradberry (PBR Streetgang) – “Some great sounds on this .. look forward to giving it deeper listen”

Sean Johnston (A Love From Outer Space) – ‘Size of a dog is very good!’

Doc L Junior – “Dirty as it should be and crazy like a true super hero.”

Billy Scurry – “Feels like I’ve played one of these every set for the past 20 years!! Hot stuff indeedy Mr
Flash!!”

Joe Morris (Clandestino) – “Great stuff here, very high quality LP and something for everyone. Congratulations
Flash! I’m plumping for ‘A New Kind of Superhero’ as my fave, love the downtempo vibe on that but will defo try ‘Drug Empire’ out for the dance floors”