Travelling around Norway in the Spring is a fantastic experience. During my trip in 2013, we hooked up with the key movers and shakers involved in forming the country’s house and disco scenes. I was lucky enough to touch down in Oslo, Bergen and Tromsø, and many weird and beautiful places in the surrounding areas. I travelled with Ben Davis, who was directing the film we were working on, formed from interviews with the key people from the dance scene plus Paper Recording’s label artists such as Those Norwegians. We were also curious about the country, geography, and people and how they influenced each other’s creative passions. This film had a working title of ‘Northern Disco Lights – The Rise and Rise of Norwegian House Music’. During our visit, we spoke to as many of the DJs, producers, promoters and radio stations as we could and decided to publish these best bits that sum up the trip, the film and our findings.

Vidar Hanssen was, and still is a key stakeholder in the creative industries of Tromsø, Norway since 1989. He runs the Beatservice record label which has just passed its 200th release from mostly Tromsø based producers and artists.

Hi Vidar, A lot of artists and producers from Tromsø seem to have a mischievous sense of humour which is apparent in the music, for example, Röyksopp, Bjørn Torske, Rune Lindbæk, why do you think that is? The first generation of Tromsø artists was more mysterious and into techno using English track titles; the second generation including Ole Johan Mjøs, Bjørn Torske, Rune Lindbæk were all close friends who like having a laugh. Before they started making records, they played gigs in town all the time. Bjørn Torske (Ismistik) and Drum Island showed a lot of their sense of humour with the strange track titles and they used this humour in their records. I think the Oslo scene was also influenced, I saw a Full Pupp (label) compilation, and some of the track titles were very strange, Norwegian sounding track titles. I think this makes it interesting for the international audience abroad when they have these titles and they don’t know what it’s all about because it’s Norwegian and they don’t understand it, but the tracks are cool. The difference between growing up in Tromsø and Oslo was that they had record shops, venues and the national media was based there but in Tromsø, we didn’t have that focus on the Norwegian scene, so we just travelled directly abroad.

How did you all meet? There was only one high school or college (three years from 16 to 18) called Kongsbakken where Kolbjørn Lyslo, Gaute Barlindhaug, Torbjørn and Svein Berge, Bjørn Torske went but after me. However, Per, Geir, Rune, Bjørn and I all went to the same primary school. We were from working-class families, none of our parents was in the creative or performance industries.

When did you first hear about Bjørn Torske? Bjørn Torske was one of the people I knew that was listening to my radio show because he had been in contact and bought some of the records. When we were ordering stuff from England, sometimes you would order two copies and forget you already had an extra one so he got some of those records from me. I knew Bjørn before he was started to make music as also DJed on Brygga Radio along with Rune Lindbæk, so I knew him from those days. I started following him when he made his more techno music under the Ismistik alias. 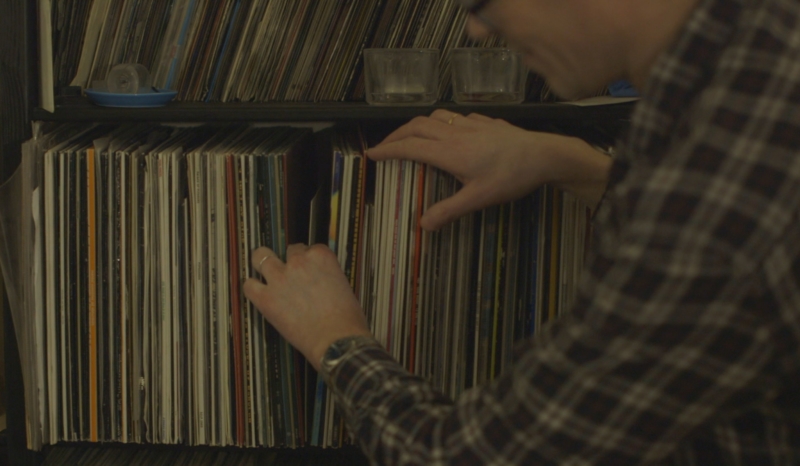 What was Brygga Radio like? We had four or five local radio stations in Tromsø, and Brygga Radio was for the more alternative, anarchic styles of music. A lot of guys had shows on Brygga from the first wave of Tromsø music producers like Per Martinsen and then from the second wave with people such as Rune Lindbæk.

How did the Norwegian disco compilations come about?
In the beginning, there was a lot of techno from the Tromsø artists, then we had this period where there was some techno but also some electronic and breakbeat stuff. As we approached the year 2000, people were starting to release a lot of house music from international labels, some on their own labels and some one-off stuff that they made themselves. Also, in this period we had a very small, tiny club in Tromsø called Yazz’n which was the start of the club scene that you now see in Tromsø. The club nights mostly played funk and house music. I DJed there a few times and the first Beatservice compilation, ‘Prima Norsk’ was my DJ set at the time. My thoughts were that the music was very cool and needed to reach a larger audience.

Do you think disco has had an influence on Norwegian dance music? When you DJ with house music those records have disco elements, but the pure disco scene is more of an Oslo thing. You have Bjørn Torske who has done some cool disco stuff. There are not many disco artists in Tromsø. When Bjørn made his disco records he was living in Bergen.

Did the ‘Bergen Wave’ make a difference to your record label Beatservice with the increasing international attention focused on Norwegian music?
Beatservice has always been an underground label and the successes have been more by accident than design. For example, the first Xploding Plastix album has been the label’s best-selling album and my biggest success has come with a pop style, a guitar-driven band called Flunk. 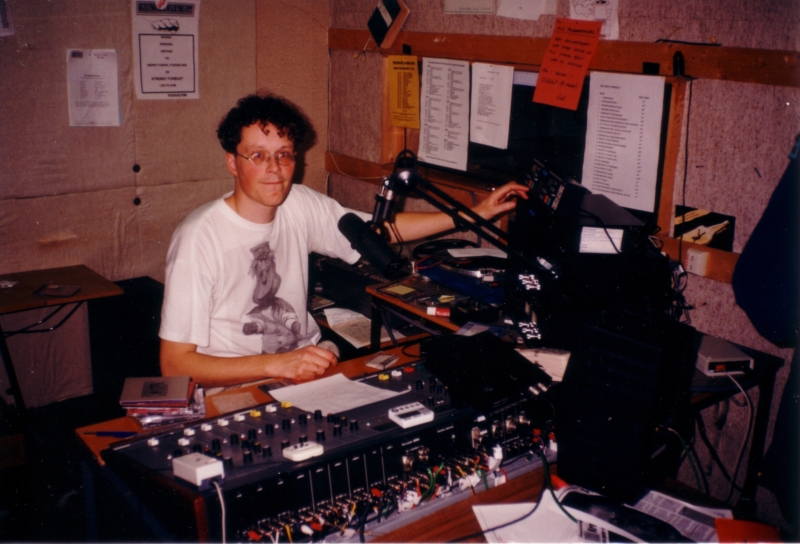 Do you think Norwegian electronic music has certain characteristics?
I think it’s spacy and has a bit of playfulness. You have a lot of sub-genres here, there are also some very good drum and bass players in Norway. Now you have a new generation of electronic artists, Cashmere Cat, for example, he is a very young guy with a lot of musical skills.

What’s your favourite ever Norwegian club?
My favourite club must be the original Yazz’n because it was so intimate and small, it’s legendary but nowadays I really like two clubs in Tromsø called Circa and Verte (VT – Verdensteatret). In Oslo, I have had some memorable evenings at Blå.

Who is your favourite Norwegian producer?
It is very difficult to pick one Norwegian producer. It switches from time to time. Nowadays I like Lindstrøm very much. I have a complete Lindstrom compilation on my car stereo. I like everything he has done, but also the Geir Jenssen’s Biosphere is classic. 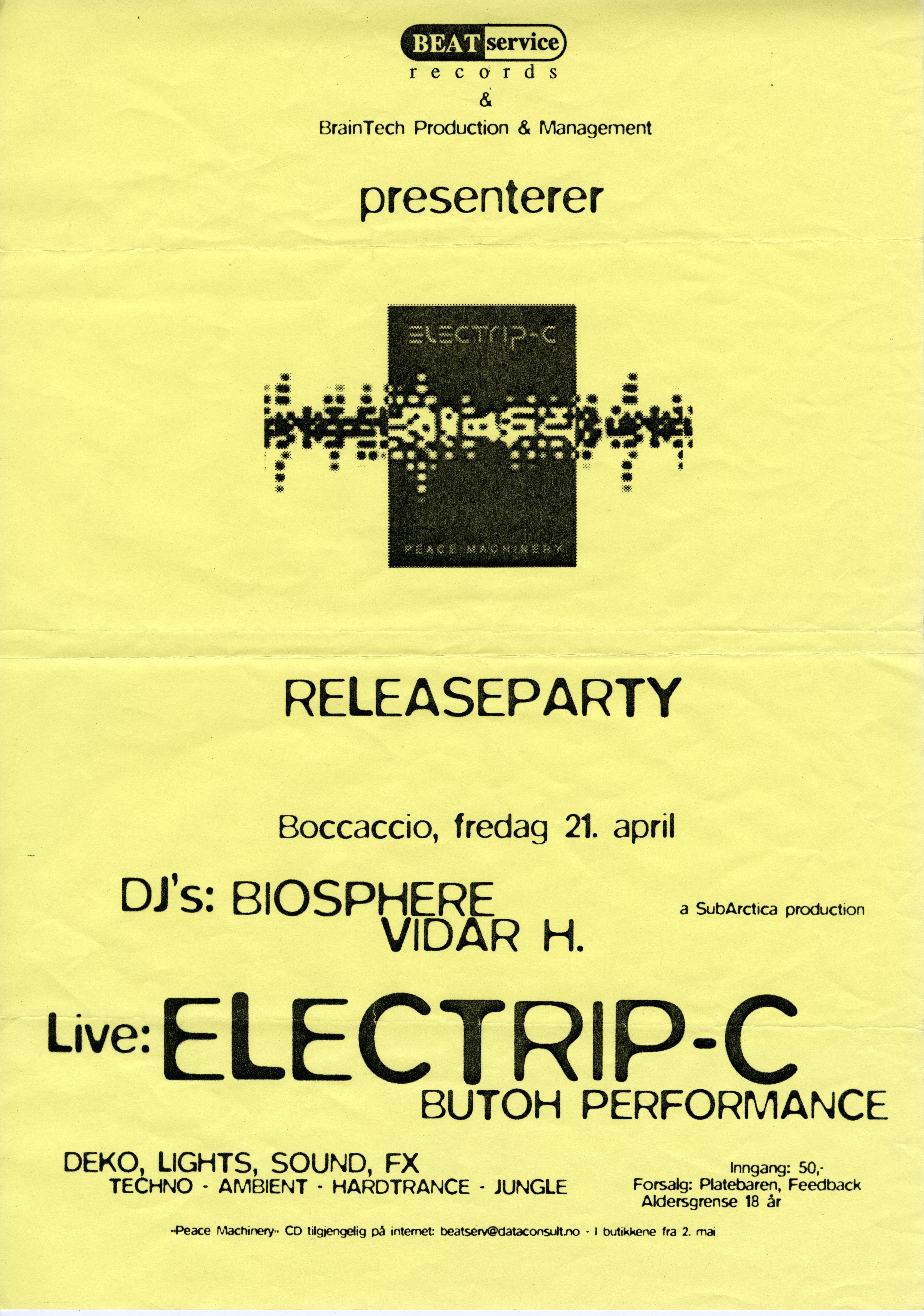 Vidar Hanssen promotes an event with Biosphere in April-1995

These excerpts were recorded and transcribed with some parts of the interview being used in the final print of the Northern Disco Lights feature documentary film.

Recorded on a Zoom H2.