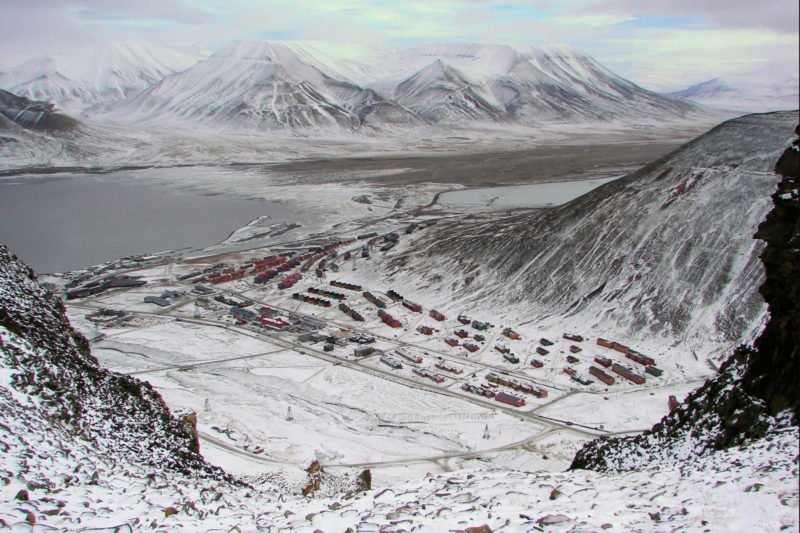 After three years in the making, our film Northern Disco Lights covering the birth and rise of Norwegian dance music has been released, well received, competed at film festivals, won an award, been shown on TV and is now streaming on Red Bull TV. We have just had a big show at London’s Village Underground and the promo cycle is pretty much over, except for one final road trip.

Team NDL are headed to the place that is the most northern bit of Northern Norway…with Viking horns on. In fact, it’s the northern most settlement in the world –Svalbård.

Since seeing Carl Christian Lein Størmer, Per and Aggie Martinsen’s brilliant film Ghost Radio Hunter (go seek) it’s been caught in our imaginations and we’ve been trying to get there ever since. There are more polar bears than people (approx. 3000 / 2400), it’s pitch black for 6 months of the year and has a deserted Soviet mining town. It’s as far North from Tromsø as Tromsø is from Oslo and it’s next stop, the North Pole.

After much manoeuvring, Per (Mental Overdrive) managed to arrange a trip to the island for a screening and party with Mental Overdrive live, myself (Flash Atkins) and the mighty Bjørn Torske. Pete Jenkinson (producer) is along for the trip but unfortunately, the third cog in the production team, camera wizz Terje Rafaelsen won’t be as he’s working. He’ll be missed.

It’s hard to know what to expect from the party but the first thing that comes to mind is Gruff Rhys wearing a robot head in the Patagonian outback and playing to a room full of bemused locals in in his excellent film, Separado!  We shall see.

So it’s time to practise my gun skills (everybody carries them in case of bear attacks) and stock up on vitamin D.

An over night stay in Tromsø where we catch up with Terje and nail the duty free. The city used to feel a long way North, not any more. Forecast for Longyearbyen, -1 and 6 metres per second wind that will make it feel like -10. Coats and snow boots are borrowed.

We get on the once daily flight and take off for the Arctic with additional decks, CDJs and flight cases in tow. It’s an hour and forty minutes and a very strange sensation as it gets steadily darker outside. It really does feel like we are flying into the abyss, especially when the wind picks up and things get pretty choppy. As we start to descend, the aircraft is pushed and pulled around and there is still nothing to see outside. Suddenly landing lights appear at eye height and it’s white-knuckle time. Everybody seems to be holding their breath and there’s a collective exhale as we touch the ground. 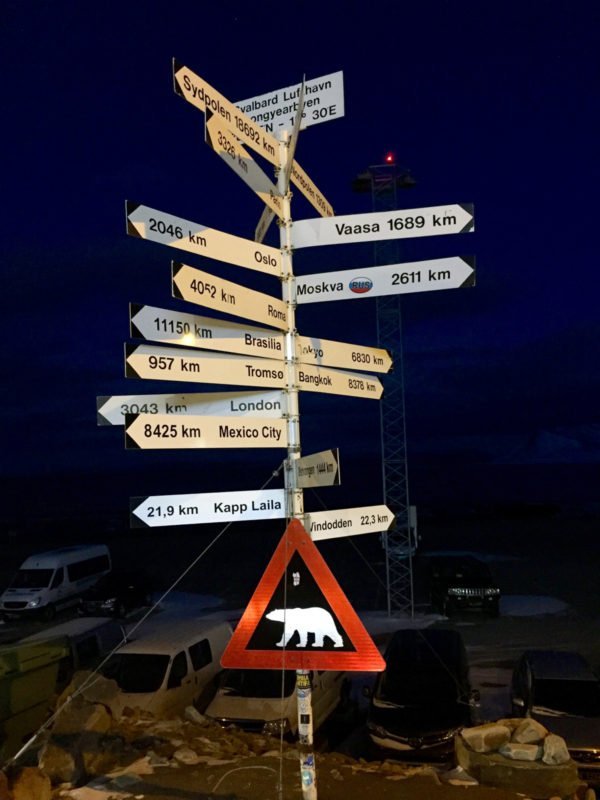 So here we are in Longyearbyen, the world’s most Northernmost settlement. We are greeted by Jan Martin Berg (our host for the weekend and the man who put it all together) and Per, and we hook up with Bjørn Torske and Nicolas Horne who’s doing the visuals. Then it’s out in to the wilderness. Town is a few kilometres away but we take a diversion to the “Doomsday” Svalbård Global Seed Vault that stores over a million packets of seeds. It is backup for the world’s other 1,750 banks in case of regional or global crises and it certainly seems like we may need it at the moment. 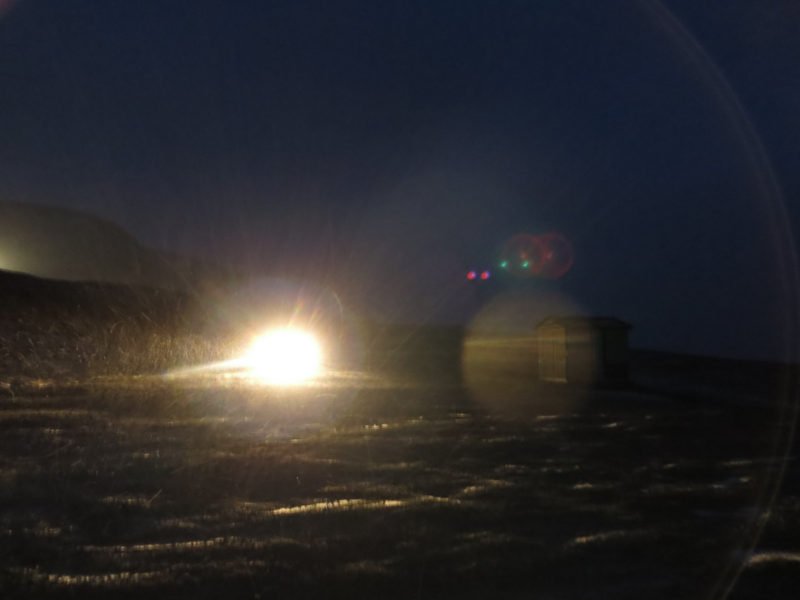 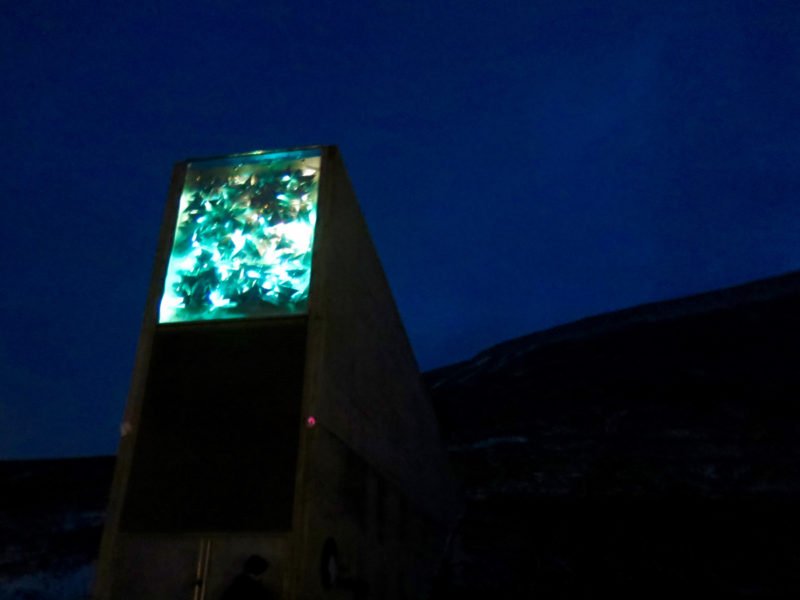 The rough track climbs up in to the mountain and it seems like we are on another planet, dark, barren and cold. The entrance is just a door with some kind of light installation over the top that makes it feel even more sci-fi. You know when they first get to the cave in Prometheus, like that.

Back in the car we bombard Jan-Martin with questions; how cold does it get (-25 degrees), do you really need a gun for polar bears (yes), do they come in to town (occasionally), how long between the 24 hour dark nights and sun (5 weeks, it changes 20 minutes a day), what’s the most difficult season (it depends on who you ask, but the 24 hour daylight sends people crackers). We find out that all the power comes from the last remaining coal-fired power station in Norway and the irony of it being next door to the seed bank is not lost on us.

The majority of the town is heated by water pipes still hot from cooling down the coal furnaces. It seems to be the only power solution as it’s too gusty for turbines, there is no electricity from the mainland and you can’t dig cables in to the permafrost. Everybody has to have a job and if you are ill or too old to care for yourself, you are shipped out. The main industry was mining, most of which have been shut down and the average stay for Norwegians is 6.3 years, but for foreigners (of which there are over 50 nationalities), 4.3. Everything is shipped in and nothing can grow.

But none of these statistics get over how weird it is. It really does feel like we are at the end of the world and that humans shouldn’t be here. If the power went down, things would go south very quickly. 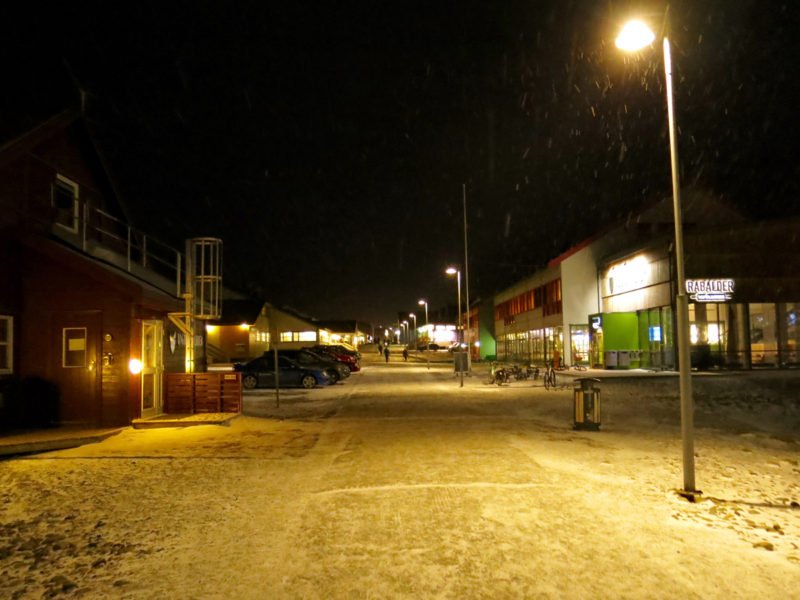 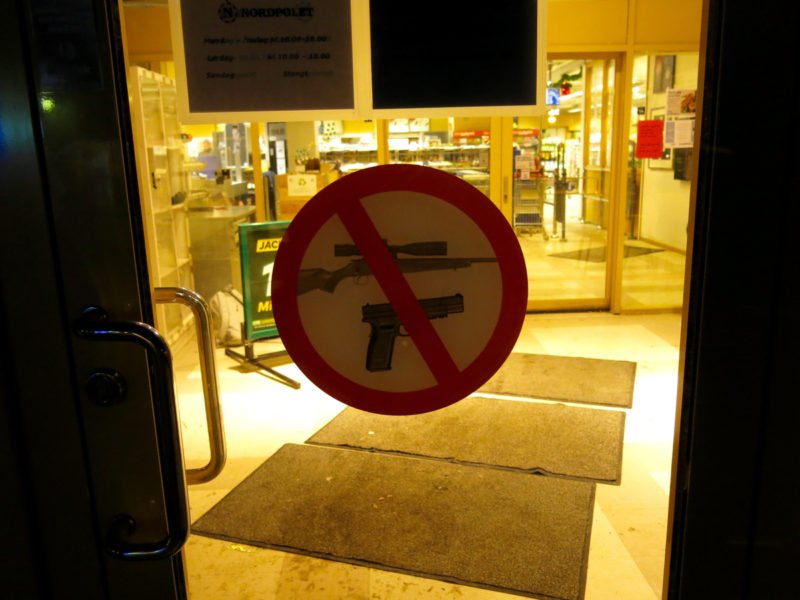 At the hotel we dump our bags and head straight into town, which is basically one main street with a few shops, bars, diners and a small supermarket. Longyearbyen runs up the middle of a massive valley with mountains on either side. It’s cold and we’re hungry and the café we go to ticks all the stereotypical boxes; wall to wall pine, arctic photos and dead animals everywhere. We then have a look around the shops, most notably one that specialises in every hide imaginable including seal, badger, wolf, reindeer (which now looks great on my bed), brown and polar bears, which come from the Canadian Inuits who are allowed to hunt the bears. But it still seems pretty wrong. I ask if they have any under the counter dodos, they don’t…. or so they say. The polar bears could well be on the endangered list because they have all been killed and stuffed, virtually every building we go in has one, some wearing boxing gloves. 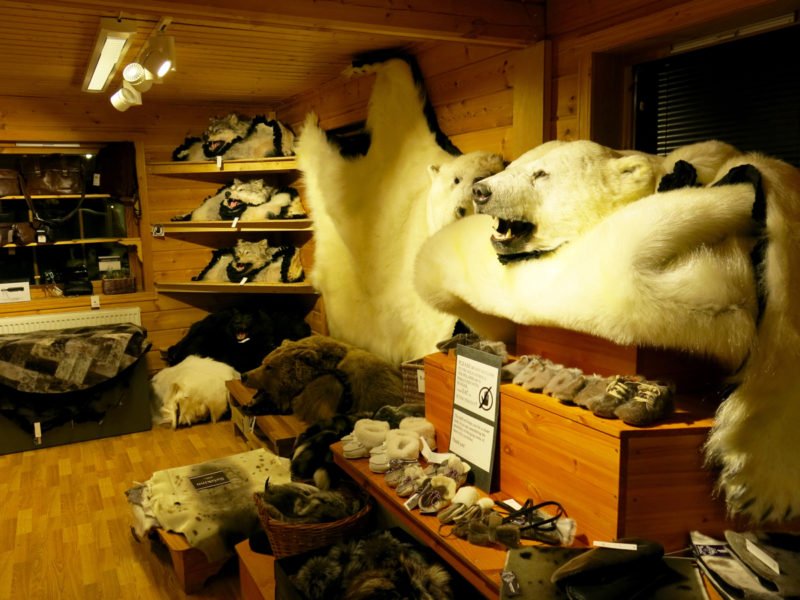 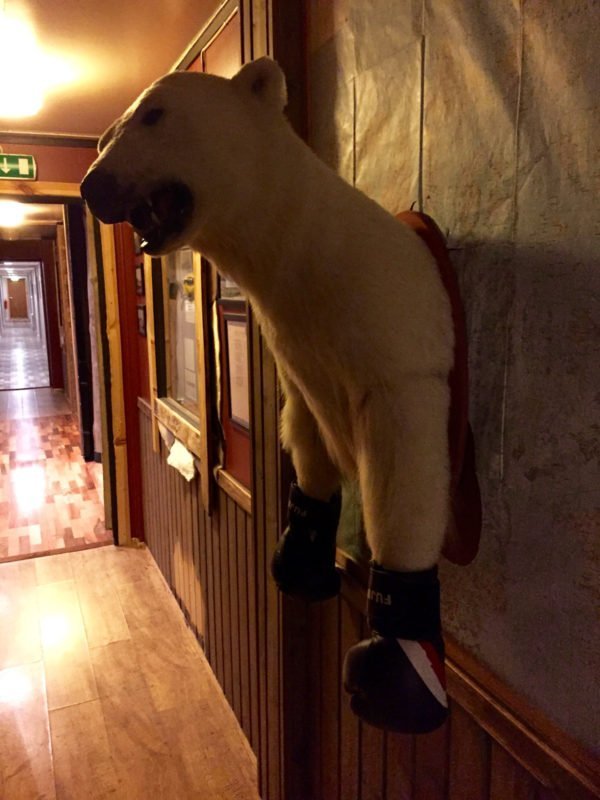 We pop in for a brew with Per’s mother-in-law, Eva Grøndal who is one of the few people to have been born here as her mother hid the pregnancy until it was too late to leave for the mainland (you’re not allowed to give birth on Svalbård). She and Per told us about how her house was destroyed in an avalanche the previous year as a result of global warming in the Arctic, due to above average snowfall.

Once evening came it felt a bit more normal to be in the dark, so we go for a dinner of reindeer (what else?) with the Tromsø KOFOR / RYK crowd and talk about how we can promote Norway in the UK on the back of the film. Then it’s on to the Svalbård Brewery bar on an industrial estate that is jumping with plenty of young beardy, outdoorsy types. When that shuts down we’re off to the Karlsberger Pub which is the local’s drinking hole. It’s going full bore and no surprises considering there are at least 350 bottle of spirits on display and a ceiling that touches your head. We promise ourselves we will go home early to save our energy for tomorrow when suddenly its 2am and last orders are called….whoops. 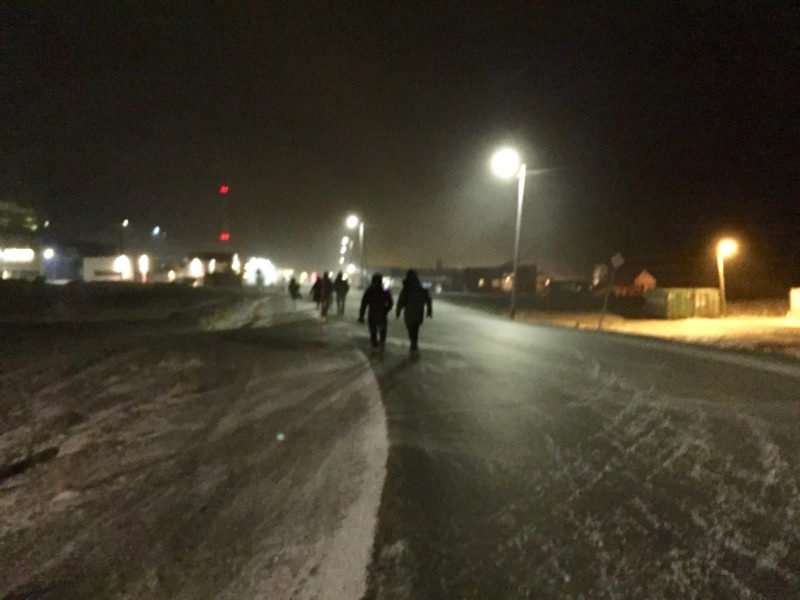 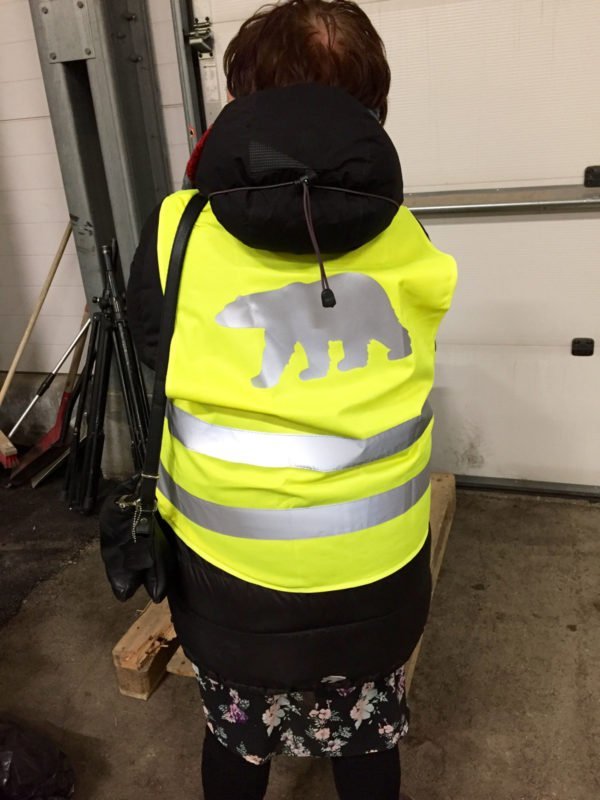 We wake late in the dark and go for breakfast in the dark, ready for a day in the dark. It constantly feels like 6pm and I can only equate it to having jetlag. There’s a trip out of town to see some huskies and with the horizontal wind rocking the car, you realize just how hostile the environment is. 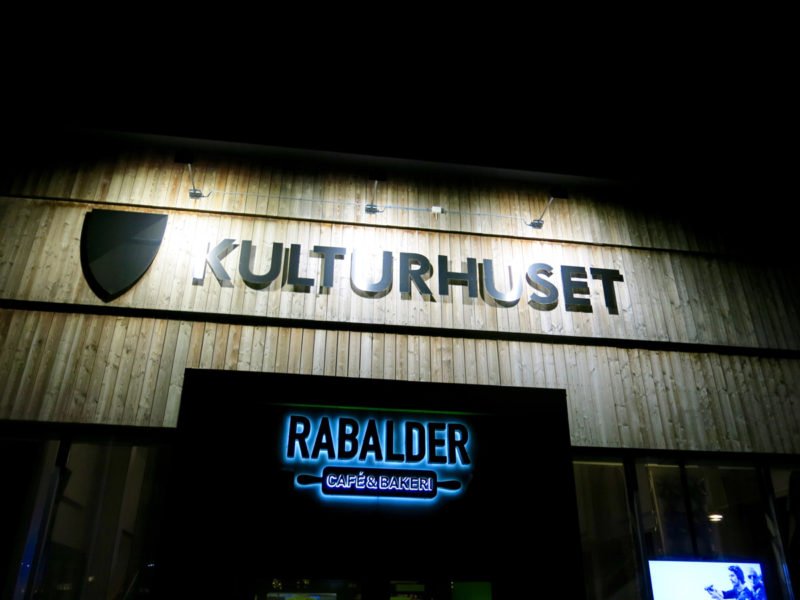 Off to the sound check at the Kulturhuset and the room is a big hall with brilliant facilities. Its a bit ‘dry’ which will be great for the film, less so for the party. After all the excitement there’s time for a disco nap then over to Eva Grøndal’s gallery, just out of town. I ask Aggie if it’s safe to walk and she isn’t 100% sure as there’s a stretch of road where there are no houses to run in to if there’s a bear. Crikey. The other danger is getting knocked over by vehicles in the dark so everybody is high-vized up to the max. We cadge a lift.

Eva’s mother and father took over 14,000 photos, mainly on Svalbård. She is curating them and they are amazing, like a lost treasure trove from a by-gone era. I look forward to them get the appreciation and audience they deserve.

At dinner (seal carpaccio is on the menu…Pete steps up) we find out that something has gone wrong with the bar in the venue so we’ll have to find somewhere else. It all gets exciting for everybody except Jan-Martin who has his head in his hands as we talk cafés, rooms and sound systems. Truth be known, we are slightly disappointed when the issue gets resolved after 40 minutes and we are back in the Kulturhuset.

At the screening, it’s pretty quiet as it seems word hasn’t really got out. The film kicks off and those that are there, enjoy it. Afterwards Mental Overdrive starts things cooking with a live modular setup that drifts from ambient noodlings in to sublime techno with plenty of cuts from his new album, “Epilogue” on Prins Thomas’ Rett I Fletta label. More people have turned up and we’ve got a party on our hands as Per proceeds to rock it. He is without question one of the great un-sung heroes of Norwegian dance music.

Next, I am going B2B with Bjørn Torske, in my opinion one of the world’s best DJs and most original producers, so I’m super chuffed. The system is immense and those records that sound like they’ve got a bit of grunt at home are suddenly bloody massive. We soon get in to a groove as house gets mixed in to disco and back again: Ulfus’ Guts! – (Funky Gibbons Dub), Dele Sosimi Afrobeat Orchetra – Too Much Information (Laolu Remix Edit), Solid State – Philly Live (Rack’em Edit), DJ Click – Lila Club and finishing off with Brassroots – Good Life. High sweat manoeuvres achieved.

Party over, it’s back to the hotel bar to see the night out and we bombard the locals with questions they must have asked a hundred times before. There’s also talk of how to get back for another party so watch this space. 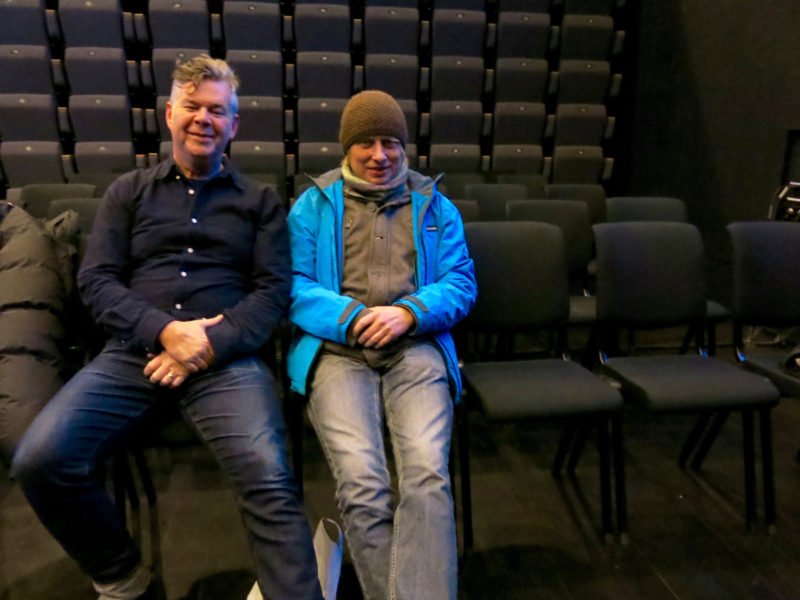 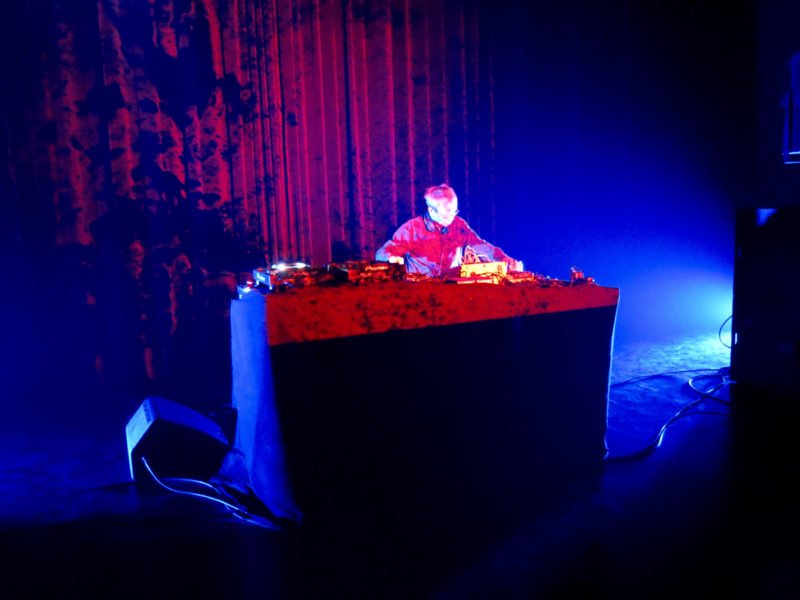 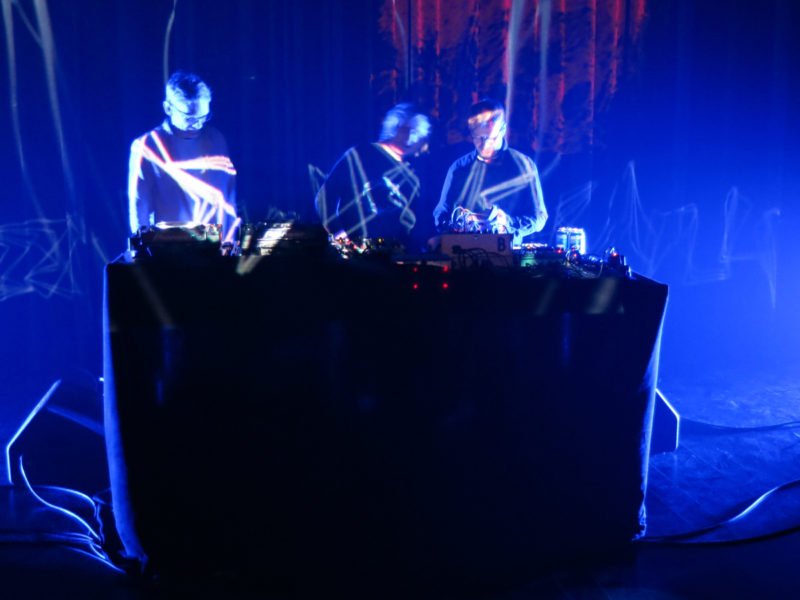 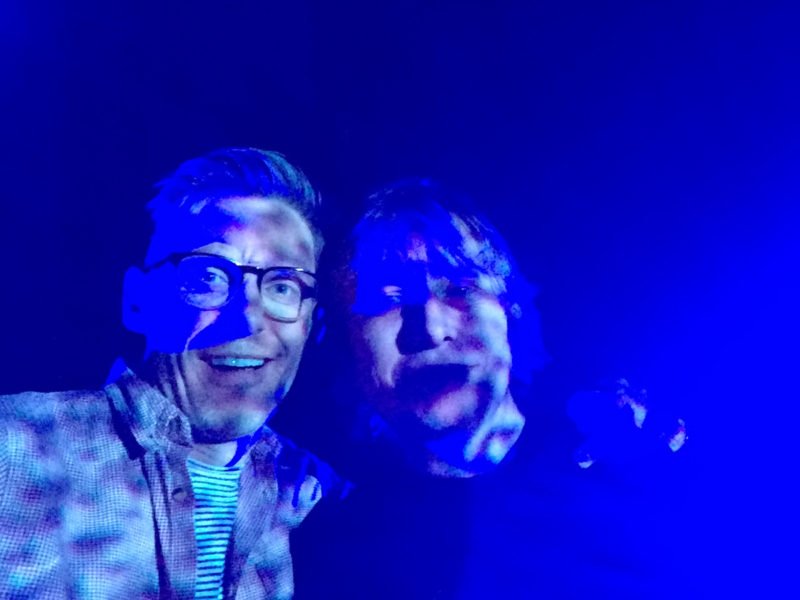 We start on the two-day trip back to Blighty feeling a bit shell shocked by the experience. It is without question one of the strangest places I have ever been. The proximity to nature and elements, climate and geography and just the isolation makes for a something very weird and wonderful.